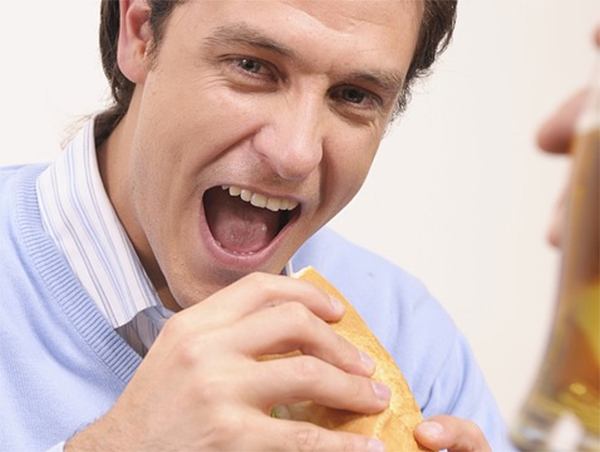 We decided to have lunch with a friend, and at the end of the meal it turned out that you could not refuse an extra dessert. Why is it so important for our appetite whether you are alone at the table or in company?

Has this happened to you often? Remember these funny dinners with friends - yes, the very ones when you leave the table and understand that you ate clearly more than necessary?

And remember, it happened and vice versa: you did not order sweets just because no one did it?

Perhaps the first thing that comes to mind is to blame everything on the influence of the environment. This is due to the presence of other people at the table and their behavior, we either overeat or deny ourselves something.

But what is the mechanism of this influence, and can we use it in order to switch to healthier food? Or maybe even for weight loss?

Back in the 1980s, research by psychologist John de Castro sent the first signal: society affects how we eat. By 1994, de Castro had collected diary entries from more than 500 people who wrote down what dishes they ate and the social context that accompanied these meals (in the company or alone).

The scientist was surprised that people ate more when they dined in groups. The experiments of other researchers also showed: in the company, people ate 40% more ice cream and 10% more pasta and beef than when they ate alone.

So what expands the scope of our gastronomic pleasure when we dine with someone? Reasons such as hunger, mood, or table talk were rejected by de Castro and other scholars.

Studies have shown: when we are in the company, our lunch lasts longer, and in these extra minutes we eat more than our body requires.

When you dine in company, you find it difficult to resist the temptation to order more and more

Observations of the behavior of visitors to various cafes and restaurants showed that the larger the group, the longer it dines. But when lunch time is limited by a certain time frame, the difference between large and small companies disappears.

In a 2006 experiment, scientists gathered 132 people and gave them either 12 or 36 minutes to eat cookies and pizza. Participants ate either alone, or in pairs, or in groups of four.

It turned out that within a limited period of time, people ate the same amount of food - regardless of the size of the company.

This laboratory experiment provided the clearest evidence that the amount of time spent at the table means more eaten.

Probably, when we have lunch with friends, we are not inclined to rush anywhere - and therefore we ask you to bring us another piece of cheesecake.

And even before lunch, even at the stage of food selection, when we know that the company will be large, we order more. This follows from observations of visitors to one of the Italian restaurants: the larger the company, the more pasta and dessert.

Lunches in the company of other people, apparently, affect our appetite, and in such cases we already think in advance that we can afford too much.

Such observations helped food specialist Peter Herman formulate his “feast hypothesis”: indulging our own weaknesses is an organic part of eating with the company, and we love being in the company because we can eat more without feeling remorse about it. conscience.

Moreover, studies show that the joy of a meal in a company can be experienced even if your partner is not real.

Fat children in the company eat less than when they are alone.

Japanese scientists suggested that participants in the experiment eat popcorn alone - either in front of a mirror, or sitting in front of a blank wall.

Those who ate sitting in front of the mirror received much more pleasure from eating. Is that why many restaurants have mirrors on their walls?

But sometimes we eat less in company. Our desire to indulge our weaknesses may come up against the need to behave properly so as not to cause condemnation of others.

We can also follow and imitate others. This behavior is called social modeling.

In university cafes, women eat less when men are with them at the table, but eat more in purely female companies.

A study of the behavior of people in different parts of the United States showed that the quantity of dessert ordered is even affected by how well-fed the waiter serving you is.

Even the physical appearance of a waiter can affect how much you order food.

In a 2014 study, it turned out that the behavior of women at the table is more influenced by the men present. In addition, during the meal we take an example from those who, in our opinion, look like us.

So far, we have not enough research to understand where the habit came from in the course of evolution, given the social context. Perhaps our ancestors, hunters and gatherers, a tendency to comply with social norms (read: do not eat more than others) facilitated the process of equitable distribution of food.

And the habit is the same and also, perhaps, helped children to understand which food is safe and satisfying, and which should be avoided, said Susanne Higgs, a professor at the University of Birmingham, who studies nutritional psychology.

About one billion people on the planet are obese, including 340 million children.

Unfortunately, since in modern life, chips and sweets lie in wait everywhere, all of our food standards go downhill.

People tend to eat what they eat in their immediate surroundings, and it seems that the danger of fattening them often just does not bother.

In these sections of society, it’s sometimes “hard to understand who is obese, since there are most of them,” says Sarah-Gene Salvey, associate professor of preventive medicine at the University of Alabama.

When you dine alone, it’s easier for you to resist and not to order too much. But everything is not so simple when a friend ordered himself another cake

Salvey studies the social aspects of eating and obesity. "When people are told what their normal weight should be (according to the body mass index), some are so surprised that they perceive it as a mistake, as something impossible," she says.

A shift in social norms towards the acceptability of a larger body mass may partially explain why many gain weight sooner or later, grow fat.

According to the World Health Organization, approximately one billion people on the planet are obese, including 340 million children.

Fortunately, a healthy diet does not contradict our desire to have friends who are more well-fed than we are.

To begin with, we need to recognize that our eating habits are shaped largely by society.

Then we must develop the habit of consciously treating what exactly and how much we eat, and learn how to manage the situation - for example, dispensing with salad or dessert.

True, if Peter Herman is right in that we consider eating in the company as a real feast and use it to indulge our own weaknesses, then a conscious restriction of appetite can go against our nature and will become almost impossible when a person decides to order on the other side of the dining table cheesecake.