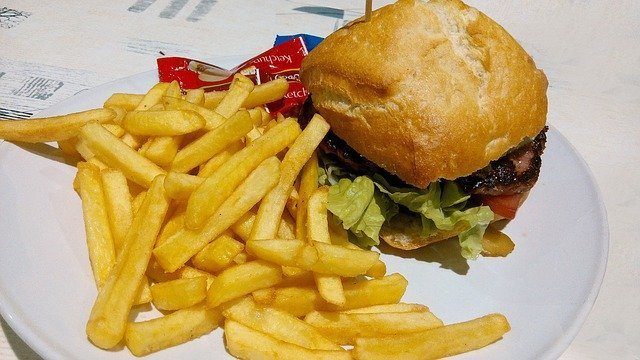 Millions of Americans eat processed food every day, and it’s killing us.

Research has linked processed foods to a range of diseases, including the notorious cardiovascular health problems. The epidemic effects both the quality and quality of food. According to the US Department of Agriculture, in 2009, about 17 million people in the country experienced a "lack of food." The most vulnerable in this situation, according to agency statistics, single mothers, African American and Hispanic families. In 2008, 24.8 million Americans received food stamps every month.

With food stamps you can buy any food in almost any supermarket, even in the most expensive one. You can’t buy alcohol and household goods, such as shampoo, laundry detergent, and so on.

Grocery vouchers, which are not at all like vouchers, but rather on an electronic metro pass, have another limit: a little more than $ 200 can be spent per month. Food stamps were awarded to those whose monthly net income per person does not exceed $ 903, for two - $1,215, for three - $1,526.

“They told me that: these products are not for you, but for your children,” recalls Vayrim, a mother of two. Two little daughters revolve around a mother laying out food on plates.

“You can buy any food at food stalls in almost any supermarket, even the most expensive one,” says Vayrim. “You can’t buy alcohol and household goods, such as shampoo, laundry detergent, and so on. And you can’t buy ready-made take-away food.”

I went to different shops and chose where it is cheaper, I tried to buy meat, vegetables and cereals. We did not starve.

I look at my last check from the supermarket - almost $30 for a couple of vegetables, 2 kg of fruit, yogurt and a package of granola. I look at another check from the Whole Foods supermarket, which is famous for selling environmentally friendly products. For the same fruits, vegetables and salads - $40. How to live on a little over 200 a month with two young children?

To eat well, you need to cook

On the website of the US Department of Agriculture, which in addition to issuing food stamps has a ton of other functions. There are instructions on healthy eating, such as amount of proteins, fats and carbohydrates per day.

How to lead a healthy lifestyle to a person who would like to, but cannot afford to buy the "right" foods in the required quantity, I ask the professor of New York University and the author of numerous books on healthy eating Marion Nestle.

“This is possible if a person knows how to cook,” the nutritionist Nestle is convinced. “But this requires skills and time, and if both adults work in the family, then where to get this time?”

"On the other hand, the availability of certain products is the result of a national policy. The state subsidizes some products and does not subsidize others, so as a result of such a policy the products that have been processed are the cheapest, but the substances that are least useful to the body in them," she adds.

Food in America has become almost the main determinant of social status. If earlier such a marker was fashion, clothes, now food has taken this place.

Epidemiologist Adam Drewnowski of the University of Washington in Seattle is one of the most respected specialists in his field. In a study he conducted last spring, Drevnovsky showed how prices for some products in Seattle and its environs changed from 2004 to 2008.

Food prices have risen by an average of 25% over these four years, but the most nutritious products (red pepper, oysters, spinach, green salad, etc.) have risen in price by 29%, while the prices for the least nutritious (white sugar, cola, candy) rose only 16%.

Vegetables and fruits from this New York market are not available to everyone.

“Food in America has become almost the main determinant of social status,” says Drevnovsky. “If fashion and clothes were such a marker, now food has taken this place: the rich buy food in some supermarkets or on organic farms, and the poor in others".

However, unlike many other specialists who say that people with a small income do not pay attention to the nutritional value and usefulness of the products they buy because of a lack of knowledge in this area, Drevnowski believes that this is not a matter of education, but of lack of money.

"It's not their fault. They buy what they can afford," the epidemiologist is sure.

“It’s not they who are to blame, but all of us, including the people who determine the country's food policy: how did it happen that wholesome foods cost more than junk food? This should not be,” he said.

Adam Drewnowski says that not only the price has changed, but also the attitude to food.

Drewnowski notes that in this regard, US food policy is not much different from European. "This is a systemic mistake that occurred several decades ago when bets were placed on the mass production of cheap calories - corn, soy and sugar. Subsidies in America and Europe are used to grow these crops," explains Adam Drewnowski.

As a result of this policy, vegetables, fruits, and other healthy vitamin-containing products have become, as Drevnovsky says, a luxury not only for the poor, but also for many members of the middle class. Not only the price has changed, but also the attitude to food.

Food as a medicine

In America, poverty is perceived as a moral loss; the man himself is always blamed for this. I believe that poor people are not always guilty of their poverty and therefore the state should not tell them what to buy and what to eat.

“Instead of a dining table, people buy a coffee table or eat while sitting at the TV, but mostly those who practically do not cook at home. There are more and more such people,” says Drevnovsky. In America people look at food primarily as a source of calories. Food has become almost a medicine with which you can either cure the disease or aggravate it".

Not so long ago, the American media discussed on their pages a proposal that immediately raised complaints: to ban recipients of food stamps from buying carbonated drinks on them. Health ministry officials say this could be one way to fight obesity among schoolchildren. Opponents called this proposal state intervention in private life.

"I believe that by taking such a measure, the state would thereby show that people using food stamps are making the wrong choice when buying soda," says Drevnowski.

But he makes a reservation: “Another sensitive point: in America, poverty is perceived as a moral loss, the person himself is always blamed for this. I believe that poor people are not always guilty of their poverty and therefore the state should not tell them what to buy and what to eat".

US government subsidizes corn, soy and sugar production. As for obesity, here, according to Drevnovsky's research, among those who use food stamps and other state subsidies, there are not so many overweight people.

"The highest percentage of obesity among those whose annual income ranges from 25 to 50 thousand dollars a year for the whole family," the epidemiologist emphasizes.

Once upon a time, people with this level of income were considered the middle class in America. Now, says Drevnovsky, they can be called "almost poor": this money is enough to feed a family, but not to buy the "right" products.

Many years of research by the scientist indicate that obesity in America is not suffered by those who live below the poverty line (whose income does not exceed 25 thousand dollars a year), but those who barely crossed this line.

“Money, education, and profession — these three categories make it possible to judge whether a person eats well or poorly,” concludes Adam Drevnovsky.

The average American spends 13% of his income every month on food, including going to a restaurant and ordering ready-made meals at home.

My friend Alexandra, who has been living in New York for more than 10 years, also spends about 20% of her salary on food, i.e. $1,000 a month. She also believes that he eats fully, buying almost all the products in expensive supermarkets specializing in the sale of organic food.