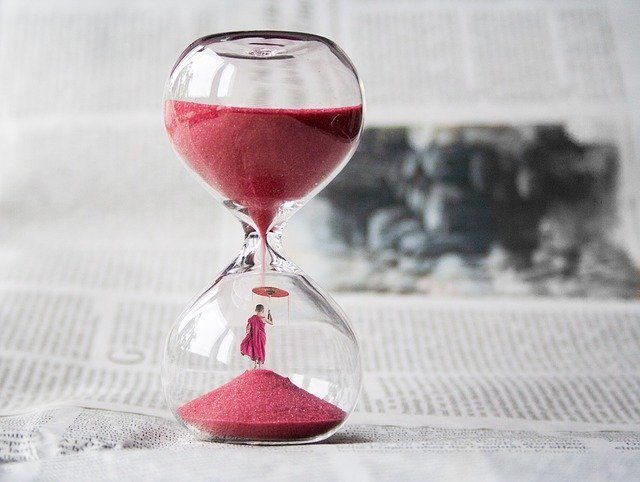 And another year has passed... The more mature we become, the more we think the days, weeks, months flash faster. If only you could slow down time! - we often think. But, as Claudia Hammond, the author of The Curved Time, explains, our problems with running minutes are due to the fact that we do not understand the essence of time. What can be done about this?

For most of us, time is something linear, absolute and flowing all the time - but is it true? And how can we change our ideas about time so that we are no longer bothered by the fact that it passes quickly?

“Time” is the most commonly used noun in English. We all know this feeling - “time is running out.” Our present immediately turns into the past, “today” quickly becomes “yesterday”.

If you live in an area with a changing climate, then every year before you change season after season. When we grow up and become adults, the years accelerate and begin to flicker one after another.

Although neuroscientists have not yet been able to find a built-in clock in the human brain that is responsible for tracking the passing time, people surprisingly feel it well.

If someone told us that he would come in five minutes, we have some idea when to wait for him. We have the feeling of a week or a month. As a result, most of us can say that the functions of time are quite obvious: it constantly leaves at a measurable pace, and the direction is also clear - from the future to the past.

Of course, a person’s sense of time can depend not only on biology, but also on cultural traditions and the century in which we live.

For example, in the language of the Amazonian tribe Amondava there is no word “time” at all. According to some scholars, they do not have the concept of time within which any events take place.

Meanwhile, it is difficult for us to say exactly how time was perceived in the distant past, since research on this began only 150 years ago.

We know that Aristotle saw the present as something constantly changing. Around 160 A.D. the Roman emperor and philosopher Marcus Aurelius described time as a river of passing events. And today, at least in the West, many still use these ideas.

However, physicists tell us a different story. Despite the fact that time is what seems to us to flow in one direction, some scientists do not agree with this.

In the last century, the discoveries of Albert Einstein blew up humanity’s notions of time. He demonstrated that time is created by things, it does not wait somewhere there until things begin to happen inside it.

Einstein showed that time is relative, it flows more slowly for fast-moving objects. Events do not occur routinely. There is no single universal, common to all “now” - in the sense in which it was understood in Newtonian physics.

Yes, this is true - many events taking place in the Universe can be arranged in a certain sequential order, but time is not always laid out on the shelves of the past, present and future. Some equations of physics work in any of the directions.

Several physicists, including Carlo Rovelli, author of popular books, go even further, suggesting that time does not go anywhere. It simply does not exist; it is an illusion.

Of course, scientists can assume that time does not exist, but we know from our own experience: a sense of time, perception of time is characteristic of every person. The evidence of physicists contradicts the way we perceive life, its course.

Yes, our concept of the future or the past may not be applicable to everything that happens everywhere in the Universe, but it reflects the realities of our life on planet Earth.

However, like Newton’s idea of absolute time, our human idea of time may be erroneous. There is a more appropriate approach to it.

One aspect of the perception of time that is common to most of us is how we think about our past, presenting it as a gigantic video archive, where we can go to recall certain events in our lives.

But psychologists have already shown that autobiographical memory does not work at all like that. Most of us forget much more than we remember, sometimes completely forgetting what happened, despite the fact that our friends or relatives insist that it was with us. Sometimes even reminders of specific episodes of the past do not help.

We preserve memories so that a meaning is created for what happened. And every time we turn to them, we reconstruct the events so that they do not contradict the new information that we possess.

To convince a person that something happened to him in the past that he does not remember now is much easier than it seems to us.

Psychologist Elizabeth Loftus has been researching this phenomenon for decades, convincing people that they remember how they once kissed a giant green frog. Or one day they met a rabbit Bugs Bunny (a cartoon character in Warner Bros. Studios) at Disneyland.

And here is another mistake of ours: it seems to us that imagining the future is a process that is different from thinking about the past. In fact, both processes are interconnected.

We call for help the same areas of the brain for both memories and imagination of what may happen to us in the future.

It is the possession of memories that allows us to construct the future, mixing scenes of what has already happened to us on the screen of our mind. This skill allows us to make plans and test different possibilities and hypotheses before we start putting plans into practice.

All this is the result of how our brain perceives time. A baby with almost no autobiographical memories lives exclusively in the present. He is pleased. He is crying. He is hungry. He feels bad. The baby experiences all this, but does not think about how cold he was a month ago and does not worry that the temperature in the room will drop again.

Gradually, the baby begins to develop a sense of himself. Along with this comes the understanding of time, the ability to distinguish yesterday from tomorrow.

Time is at the heart of not only how we organize our life, but also how we feel it

Even at that age, however, imagining yourself in the future is a very difficult task. Psychologist Janie Bazby Grant found that if you ask three-year-old kids what they will do tomorrow, only a third of them will give an answer that can be regarded as acceptable, plausible.

When psychologist Christina Ethans gave small children salty bagels, and then left them to choose what else they want - the same bagels or water. It is not surprising that after salt they were thirsty and most chose water.

Young children are not able to imagine themselves in the future, where they will feel differently than at the present moment.

Past experience is actively being created in our brains. For the construction of the perception of time, various factors are important - memory, concentration, emotions, the feeling of one place or another.

Our idea of time is rooted in our mental reality. Time is the basis not only of how we organize our life, but also of how we feel it.

Of course, you can say that it doesn’t matter at all whether we perceive time correctly according to the laws of physics. We don’t have to remember all the time that the Earth is a ball when we walk on a flat surface.

We can say that the sun rises in the morning and sets in the evening, although we know perfectly well that this Earth revolves around the Sun, and not vice versa.

Our ideas about the world do not try to correspond to scientific ones - we are able to feel the world around us, using only the feelings we possess.

​Read More
Can We Survive On Just One Type Of Meal?