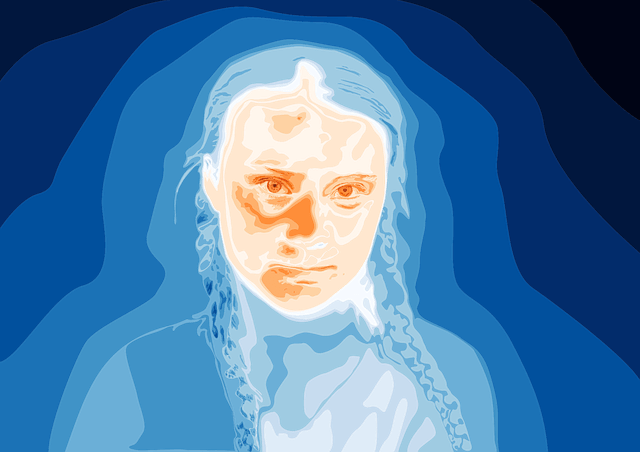 By the age of 16, a Swedish schoolgirl Greta Thunberg, who once decided to skip classes for the protest, managed to become a nominee for the Nobel Peace Prize, the “person of the year” according to GQ, to speak in Davos and in the British Parliament, to meet with Barack Obama and the Pope.

All this is contrary to an incurable mental disorder. Although Thunberg herself believes that her diagnosis only helps her in her childhood struggle to attract the attention of politicians, businessmen and parliamentarians around the world to climate change issues.

A year ago, almost no one knew about her. Now she is called the most influential teenager. We will tell you how a 16-year-old schoolgirl became a symbol and inspirer of eco-movement.

On September 23, the UN Climate Change Summit will be held in New York. The organizers invited 16-year-old Greta to speak at the event, and the girl gladly accepted the offer. Public speaking has long become a familiar thing for a schoolgirl. The difficulty was to figure out how to get to the US from Europe.

Thunberg basically does not fly on airplanes: they, in her opinion, cause too much harm to the environment. The only alternative way is by water. Help was offered by Pierre Casiraghi, grandson of the thirteenth prince of Monaco Rainier III and actress Grace Kelly, and Boris Herrmann, the owner of an unusual racing yacht.

The 18-meter Malizia II is one of the fastest sailing yachts on the planet. The ship is equipped with solar panels and underwater turbines that generate electricity on board. There is no toilet on the yacht: in return - an ordinary bucket. There is no kitchen either. Nowhere to sleep. To drink, you will have to use a salt water desalter.

Greta sailed from British Plymouth on August 14th. Traveling to America should take about two weeks. Her movements can be monitored on an interactive map; according to her, more than two and a half thousand kilometers remained before New York.

16-year-old Thunberg has never had to live in such conditions. Before the trip, she admitted that she was a little nervous. “I don’t know how difficult the trip can be: will there be seasickness, will I get homesick or just scared of something,” Greta said.

Before leaving, she told reporters that she would definitely miss her two dogs - Labradors Roxy and Moses. Greta took many books with her: now she is reading “Hush” by Susan Kane, a book about introverts - the same as herself.

Walking school for the sake of climate

A year ago, Greta Thunberg decided to skip classes at school. Instead of lessons, she came to the building of the Swedish parliament and sat down with a banner on the pavement in front of the entrance.

On the leaflets that she soon began to hand out to passers-by, it was written: "I do this because you adults do not care about my future." From this began Greta's ecoactivism. Many schoolchildren and students all over the world liked the idea of skipping classes, who began to massively join the Swedish schoolgirl's protest.

Thunberg herself unexpected popularity was not easy. During her speech at the Ted Talks conference, Greta said that she was seriously ill at age 11: doctors diagnosed her with depression, the girl stopped eating and talking. According to her, in two months she lost 10 kilograms, and only after that the doctors discovered that Greta had Asperger syndrome, as well as obsessive-compulsive disorder and selective mutism.

Asperger Syndrome is a congenital and incurable mental disorder, a form of autism. The disorder affects a person's communication skills. The classic obsessive-compulsive disorder assumes that a person has obsessive thoughts that cause anxiety, and in order to get rid of it, a person performs certain repetitive actions. One of the most striking examples is the fear of infection or dirt: in this case, a person can constantly wash their hands. Selective mutism is manifested as a person’s inability to talk in individual situations. A child with selective mutism can, for example, communicate well with his family, but not talk at school.

Thunberg herself summarizes her diagnoses in this way: "Simply put, this means that I speak only when I consider it necessary."

“For people with an autism spectrum disorder, the world is divided into black and white. We don’t really know how to lie. And we usually don’t like playing social games that you like so much. I think we autistic are much more normal, and everyone else, on the contrary, is strange. Especially when it comes to the environmental crisis, "says Greta.

The schoolgirl herself admits: she sees no room for compromise on climate change. In the world in which Greta lives, there is no place for “shades of gray”: if scientists agree that emissions should be reduced, then they need to be reduced.

Greta's parents admit that their dedication to environmental issues has become a way for her daughter to live, no less. True, they are not very happy that their daughter is skipping classes.

“She must be at school – we cannot support her decision [to skip classes]. But we respect her desire to defend her position. She can either sit at home and be very unhappy, or protest and be happy,” said her father Svante Thunberg.

He admits that Greta made the whole family change their lifestyle. Before his daughter began to read books on climate change, Svante, according to him, did not know anything about this problem.

The media love to write about the fact that young Greta influenced the family so much that Malena Hernman, even under the influence of her daughter, even completed her career as an opera singer: such work involves frequent flights that harm the environment. Svante Thunberg is accompanied by his daughter on all her trips around the world.

Attempts by opponents to criticize the 16-year-old Greta almost always led to the fact that a large number of her supporters and eco-activists stood up for the girl on a united front. The most famous case occurred with the participation of Australian journalist and columnist Andrew Bolt, who called Thunberg "the most influential teenager."

In his column for Herald Sun, he wrote that “he’s never seen such a young girl with so many mental disorders that so many adults would perceive as a guru.”

“Thunberg has a very rare quality - absolute confidence. She does not doubt one iota and does not make the slightest compromise. This allows her supporters who have any doubts to relax, relying on her totalitarian confidence,” writes Bolt - If you believe the book her mother wrote when Thunberg was 11 years old, she didn’t eat anything for two months. For years she suffered from depression until she was finally diagnosed with Asperger Syndrome, high-functioning autism and obsessive-compulsive disorder. Her strong from Fucking climate change is not surprising for a person with disorders that exacerbate this fear. "

Not only activists, but also many media outlets called the Bolt column deeply offensive.

Greta herself answered the journalist on Twitter: “I am really“ deeply concerned ”(in the original, Greta uses the words “deeply disturbed”, which can also describe a person with serious mental disabilities, as Bolt himself called her) the fact that these campaigns hate will never end because we children turn to science. Where are the adults? "

The journalist in his column wondered why so many adults, including politicians, top managers, and even the pope, were so enthusiastic about a young girl.

Indeed, the pope shook Greta's hand, congratulated the girl and advised her to "continue to work." Thunberg and Michael Gove, the British Minister for the Environment, listened attentively, who admitted that thanks to Greta and other activists, he realized that "it’s time to act."

Greta herself choosily approaches the choice of interlocutors. When reporters asked her if she would meet with Donald Trump in the US, she called such an opportunity a waste of time.

But not all politicians were happy with Greta's initiatives. Former British Prime Minister Teresa May said that school strikes by her supporters increase the burden on teachers, and the protesters themselves "spent their time in vain." May as a whole had a positive attitude towards the interest of schoolchildren in environmental problems, but emphasized that it is better to first get an education and become professionals to help solve problems at a different level.